As I was leaving work on Dec 23rd I received a call that a Great Grey Owl was in Kingsville.  This was the very first record of a Great Grey for Essex County and was a "life bird" so I immediately set off in hopes to catch a glimpse of North America's largest owl. As I arrived the sun was setting and at least 10 other birders were already there standing together on the shoulder of the road. And there it was, a Great Grey Owl. It was amazing; the largest owl I've ever seen! The bird was perched on a tiny branch at the top of a tree. I've been told that these owls are capable of landing on a goldenrod stock without breaking but it was still remarkable to see such a large bird perched on such a small branch. The size of the Great Grey is very deceiving as the feathers of this owl actually make up the bulk of their size. Both Snowy and Great Horned Owls outweigh the Great Grey; however in terms of length the Great Great is still the largest owl. I stayed and watched this majestic bird for several minutes before darkness set in. Unfortunately, I didn't have my camera to document my first Great Grey so I made plans to go back.
The following morning I drove out to the site and again it wasn't hard to find the owl as many people were already there. The owl put on a magnificent display, flying from the top of a cedar and landing on a post right next to the road. This was definitely one of the most memorable bird watching/photography experiences for me yet. What a great way to end the year; can't wait to see what 2012 brings!
Great Grey Owl, Kingsville Ontario December 24, 2011 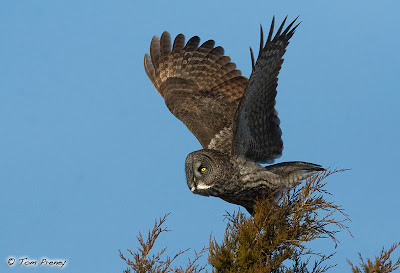 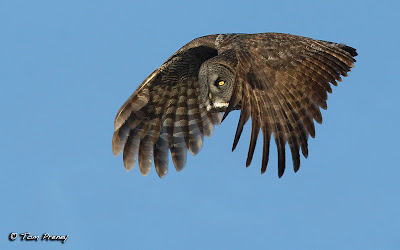 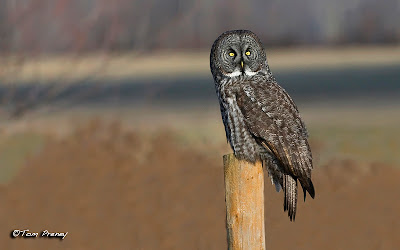